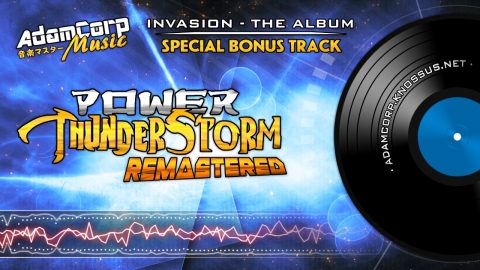 Power Thunderstorm returns in all its remastered glory! Powerful beats, awesome sound, an explosion of energy and power!

Power Thunderstorm was originally released back in January 2013. Now, after 2 years, it returns! This "Remastered Version" was made in November of the same year, as an exclusive... [Read More...]

Power Thunderstorm is back! And it's 2015! I'm sorry I didn't release anything recently, but I have not disappeared. I'm back, with many, many news and updates incoming! Stay tuned, sit back, and enjoy!

I started University this year and, well, it was more intense than I expected. It really takes away a lot of the time I used to compose music, create special effects, and graphic design in general. This explains the recent lack of content. But, as I said, I'm back now! Don't worry, there's a lot of amazing content waiting to be seen!

ORIGINAL: "I did my best with this one, I tried to make it powerful and catchy at the same time, energetic like a continuous flux of electricity raging in a thunderstorm."

Power Thunderstorm was released back in January 2013. Now, after 2 years, it returns! This "Remastered Version" was made and released in November of the same year, as an exclusive track for my first album "INVASION - The Album". I decided to finally release it to the public, for everyone to enjoy! Power Thunderstorm was (and still is) one of my favorite songs, and I'm glad you can finally listen to it in its full glory!

IMPORTANT! This song (Power Thunderstorm: Remastered) was released, with the album, in NOVEMBER 2013. This means I composed it almost one year and a half ago. This does not, by any means, represent my current music composing capabilities. Just saying :)