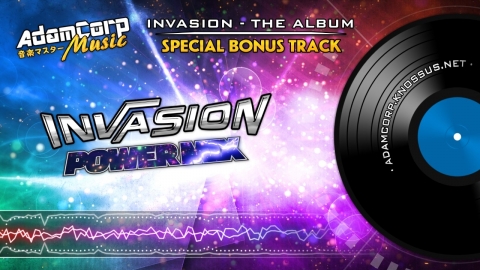 The sequel to the infamous song! Invasion returns, more powerful than ever before! POWER MIX: more than just a Remix.

"Invasion: Power Mix" was born when I released my first album. To celebrate the event, I completed what remained of the old project and released it as an exclusive song, a sort of... [Read More...]

I bet most of you saw it coming, but here it is: Invasion Power Mix! Following the previous "Remastered" releases, Invasion returns in pure remixed audio goodness! And this time it's an all-new song (not considering the album), not just a "Special Version". Yeah!

I've always liked Invasion. When it came out, it easily was one of my favorite projects. I remember that while composing it I kept going and going, I just couldn't stop. Think about this: the original composition was more than 9 minutes long! Since that was way too much, I decided to split the song and just publish a part of it.

"Invasion: Power Mix" was born when I released my first album. To celebrate the event, I completed what remained of the old project and released it as an exclusive song, a sort of "bonus" for everyone who bought the album. And now here it is, finally here for everyone to enjoy!

IMPORTANT! This song (Invasion: Power Mix) was released, with the album, in NOVEMBER 2013. This means I composed it almost one year and a half ago. This does not, by any means, represent my current music composing capabilities. Just saying :)

Having released this song, the "Album" saga really comes to an end. I hope you enjoyed the ride! Even if they were some sort of re-releases, I still spent some time creating the videos and effects and really enjoyed myself.