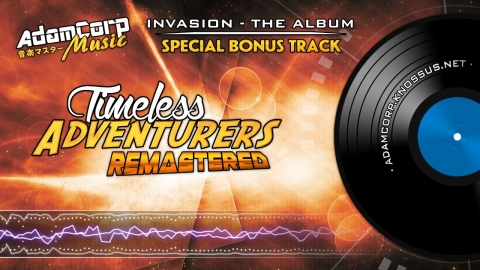 Timeless Adventurers was originally released back in November 2012 (That's a long time ago!!). This "Remastered Version" was made and released one year later, in... [Read More...]

A new entry in the "Remastered" quest! After Power Thunderstorm and Electric Sparks, now it's time for the third release: the glorious Timeless Adventurers!

I'm really glad I managed to re-release this song, since it's one of my all-time favorites. The original song lacked something, though, I wasn't fully satisfied with it. That's why this Remastered Version was made. And now it's finally available!

Timeless Adventurers was originally released back in November 2012 (That's a long time ago!!). This "Remastered Version" was made and released one year later, in November 2013, as an exclusive track for my first album "INVASION - The Album". I decided to finally release it to the public, along with all the other Remastered songs, for everyone to enjoy!

IMPORTANT! This song (Timeless Adventurers: Remastered) was released, with the album, in NOVEMBER 2013. This means I composed it almost one year and a half ago. This does not, by any means, represent my current music composing capabilities. Just saying :)