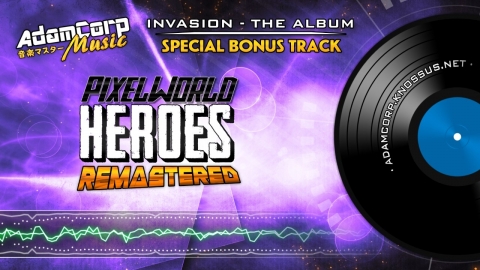 Pixelworld Heroes comes back in an all-new glorious remastered version! Bouncy and happy tunes all mixed together!

Pixelworld Heroes was originally released back in April 2013. This "Remastered Version" was made and released a few months later, in November 2013, as an exclusive track for... [Read More...]

Pixelworld Heroes has always been a song I liked, but I considered it a "weak link" of my collection. Every time I listened to it, I knew something was missing. Something was off. This led to the creation of the Remastered Version. Now you can finally listen to it the way it was supposed to be!

ORIGINAL: "A catchy videogame-like song! Bouncy and happy tunes all mixed together in a classic AdamZ style melody! I worked really hard on this song, paying attention to song progression and mastering (kinda)."

Pixelworld Heroes was originally released back in April 2013. This "Remastered Version" was made and released a few months later, in November 2013, as an exclusive track for my first album "INVASION - The Album". I decided to finally release it to the public, along with all the other Remastered songs, for everyone to enjoy!

IMPORTANT! This song (Pixelworld Heroes: Remastered) was released, with the album, in NOVEMBER 2013. This means I composed it almost one year and a half ago. This does not, by any means, represent my current music composing capabilities. Just saying :)