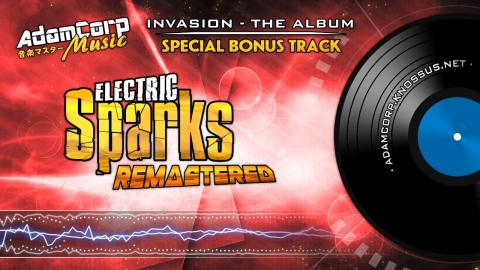 Electric Sparks is back in its remastered version! Powerful beats, catchy tunes, an awesome mix of Disco/Dance Music!

Electric Sparks was released back in February 2013. Now, two years later, makes its comeback! This "Remastered Version" was made and released in November of the same year... [Read More...]

ORIGINAL: "Powerful beats and catchy tunes meet into an awesome mix of Disco/Dance Music! This is, so far, the song I'm most proud of, and overall the most complex project. Enjoy!"

Electric Sparks was released back in February 2013. Now, two years later, makes its comeback! This "Remastered Version" was made and released in November of the same year, as an exclusive track for my first album "INVASION - The Album". I decided to finally release it to the public, for everyone to enjoy! Electric Sparks is probably the most popular song I created, I'm really excited you can now listen to it in its perfect form! Yeah!

IMPORTANT! This song (Electric Sparks: Remastered) was released, with the album, in NOVEMBER 2013. This means I composed it almost one year and a half ago. This does not, by any means, represent my current music composing capabilities. Just saying :)